Hey Todd Squad, JT here with my second review of the week, it's the rapidly releasing All New X-Men! As we saw LAST WEEK (see what I mean about rapidly?) The Original Five set off to intercept Cyclops for a chat as the issue came to a close, now let's see how the O5 fared. 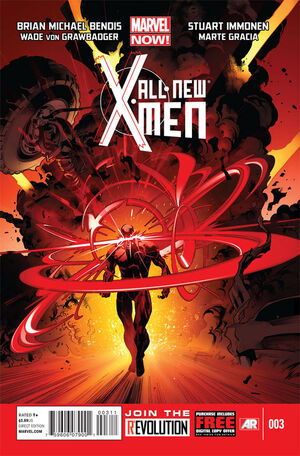 Summary: This issue kicks things off with a flashback to ten days ago, when Cyclops, Magik and Magneto find their new home, the old Weapon X place where Wolverine was created, which Cyclops dubs the "New Xavier School." From there we jump forward eight days, to see Cyclops and Magneto intercept a convoy that's transferring a prisoner, when they open fire, for some reason Magneto's powers start to mess up and he can't hold back the bullets or the truck that's headed for them, and Cyclops ends up shooting the chopper down by mistake when his visor gets knocked off. He scrambles to put it on and asks Magneto what's wrong with his powers as they free the prisoner, none other than Emma Frost. Emma asks why Scott saved her, after leaving her in the hands of the humans after stealing her Phoenix Force, but he says it wasn't him and the Phoenix made him crazy. She then questions him, saying was it him when he betrayed her, or when he killed Charles Xavier, but Cyclops stands his ground and says it wasn't him, as Emma turns away, obviously still upset. Cyclops asks where she's going and she says away from him, so he tells her to read his mind and see how sorry he is, but she can't. She says the Phoenix Force messed with their mutations, since she can't read minds, Cyclops can't control his Optic Blasts as well, and Magneto can't control his magnetism either. Magneto notes he didn't have the Phoenix Powers but Emma says Scott still let Magneto have it when he went nuts, then says "Oh wait, it was the Phoenix" very condescendingly. Emma says she's leaving, when the Police show up, and Emma says maybe they do belong in prison, but Magneto says they'll figure out a way to fix this, as Cyclops calls for Magik to transport them out of there. Back in the present time we see another new mutant pop up, at an Pro-Mutant Rally, but from there we see Cyclops trying to control his powers, but he can't. Magneto shows up and says that he still can't control his, but at least Scott did that to himself, whereas Magneto didn't have the choice of even getting the Phoenix power. Scott says it wasn;t him, but Magneto says he's done enough evil things to know that nothing made Scott do that stuff, he chose to because he wanted to, including killing Xavier, and he says Scott will help him get his powers back, or else, when the two are interrupted by Magik. Xyxlops explains that Magneto is upset with him as Mags leaves, and we discover that the Phoenix Force actually made Magik more powerful, as she can pull stuff from limbo now. The conversation is cut short when Emma explains about the new Mutant, so Cyclops and Magneto go to meet the new mutant and recruit him for the "Revolution", when Cyclops is asked when it became a revolution, and what the hell does he think he's doing... by none other than Cyclops, as the issue ends.

Thoughts: First things first I gotta mention the art, it was pretty damn great. Stuart Immoment did a great job and he drew a stunningly beautiful Emma Frost, as well as capturing the subtle emotions of Cyclops, Emma and everyone else throughout this issue. I loved the reveal that there are some problems with powers, except for Magik, which is sure to get a little spite her way from the rest of the team. I really enjoyed the scene with Emma and Cyclops, as well as the one with Cyclops and Magneto. Add that with the fact we know for a fact Cyclops and Cyclops meet, and he's there with MAGNETO.... and Jean's there..in the next issue, I couldn't be more excited. I enjoyed everything about this issue though, especially Scott playing the victim, and not being believed by Emma (she's even greater now that she's anti-Scott) or Magneto, since they've both been the bad guy. So, that said, there's nothing to stop me from giving this issue a perfect score.

Emma Frost: So it wasn't you who betrayed me and left me for dead? It wasn't you that murdered Charles Xavier in front of ALL OF US?!