Hey everyone, JT here with my second review of the week, and we're continuing the Minimum Carnage Mini-series in this month's issue of Scarlet Spider. Last time we left off, Carnage had escaped to a tiny universe, Scarlet Spider was trying to stop him, and Venom showed up, telling Scarlet Spider to surrender. Let's see if Kaine did that... which I doubt. 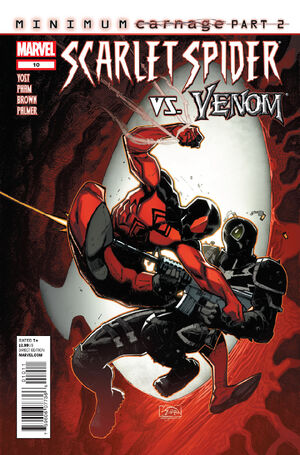 Summary: We pick up where we left off, with Kaine, extremely upset that he wasn't able to stop Carnage. Venom tells Scarlet Spider to relax, he remembers him from killing The Queen during Spider-Island, and he's there to stop Carnage, just like SS. SS tells Venom that's fine, but if he touches him again, he'll kill him. Venom says he'll keep that in mind and they discuss the tiny people that were with Carnage, when suddenly Venom loses control and the the symbiote takes over, turning him into the big, hulking Venom. With his last bit of control, Flash yells for SS to run, as Venom tries to eat SS. Kaine fights back and tries his hardest to take down Venom but he can't. Flash fights the symbiote for control as it tries to move onto Kaine, but he calms it down somehow and regains control. SS is rightfully upset at what just happened, but Venom cuts him short when they find that Dr. Ketola survived. Venom asks her where Carnage went and she said he's in a subatomic space known as the Microverse, after using that machine in the last issue, Venom says they have to go after Carnage, to which Scarlet Spider replies "@#$% That." This seems more like a JT and X crossover... Anyway, Venom says they have to go after Carnage, he's their responsibility, but SS says he's not Spider-Man and he could care less what Carnage does as long as he's out of Houston. Venom says Carnage will be back, and asks SS for help, but he tells venom to go to Micro-Land or Hell for all he cares, SS is out. In the Microverse, Carnage tells Katy Kiernan he's keeping her alive to report on what he does, he wants the world to know of his exploits, so she's allowed to live, for now. We also see that Carnage's allies seem to think he's a bit crazy as well, but they apparently need him, so they put up with him. Back in the lab, Venom is about to enter the Prometheus Pit when SS shows up, asking Venom if he really thinks Carnage will come back, to which Venom says the bad ones always do. Scarlet Spider decides to join Venom in going after Carnage as they step into the Prometheus Pit. Venom wakes up in the Microverse in a nice area with little faeries... but they quickly attack him, causing the symbiote to break apart. Venom is saved by a group of Microverse inhabitants, and they recognize Venom and tell them they need his help. Over with Kaine, we see him waking up by a yoda-like zen master, and just when it seems like things couldn't be worse for Kaine, we see that he's also by a gigantic green-bug-lobster creature that's getting ready to take out Kaine and his new friend when the issue ends.

Thoughts: It's funny, before he took over Scarlet Spider, I didn't like Chris Yost's work much, but I'll be damned if he hasn't made Scarlet Spider something I look forward to every month, and his work in this issue continues that trend. The Minimum Carnage mini has been pretty good so far, Kaine and Flash are such polar opposites that its great seeing them together, it's kind of like seeing Cap team with Wolverine, in the sense you have a guy who plays it by the book and a guy that does what he want when he wants. I enjoyed this issue, it was average, far from bad but nothing too memorable happened here. I can't wait to see what happens when Venom, Scarlet Spider, and Carnage are all at the same place at the same time.

Scarlet Spider: I know another idiot who talks about responsibility a lot.
Venom: Yeah? I know a great man who does the same.