Hey everyone, JT here once again, this time with my last review of the week, Avenging Spider-Man. Last month's issue wasn't all that great so my expectations going into this one aren't that high, but here's hoping Unlucky #13 proves to be quite the opposite. 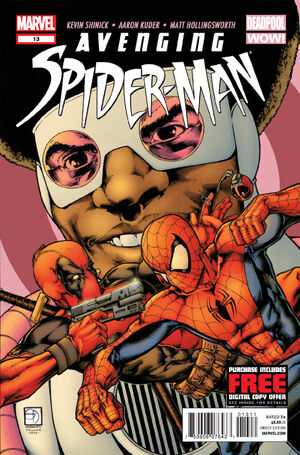 Summary: This issue starts off with Spidey finding out he was hypnotized in the last issue by a smooth, jive-talkin, slow walking, criminal by the name of the Hypno-Huster, who also hired Deadpool for the gig, agreeing to help Deadpool die for helping him, since thats what Pool wanted at the time of this story. There's an awesome part where Spidey mentions the last time he fought H.H., and Deadpool has the little editor's box telling us when it happened, then taking a shot at Wacker. Spide plans on making sure H.H. stays in jail, with his roomate, The Tinkerer (who seems to be relaxing while all of this is happening) but Spidey has to deal with a new and improved type of powers by H.H., thanks to Tinkerer. Spidey also has to deal with Deadpool, so Spidey retreats from the cell as Deadpool shoots at him, and H.H. makes it so everyone Spidey see's will be his worst fears. Just when things can't get worse for Spidey, he discovers the criminals have all left their cell's and instead of leaving, they want a piece of Spidey, and thanks to H.H.'s spell, they look like classic Spidey enemies like The Green Goblin, Kingpin, Tombstone and Morbius. Spidey's taken back a bit until he see's the names of the inmates and recognizes some of them as The Painter and Boomerang, to which he promptly cleans their respective clocks. Meanwhile, Deadpool and H.H. (who did not make the list of most awesome super-villain team-ups, I know because Deadpool checked.) H.H. tells DP if he wants him to hypnotize his heart to stop pumping like he wants, Pool has to kill Spidey. DP "ain't down with that jive" but H.H, hypnotizes him to kill Spidey. Deadpool does attack Spider-Man but manages to fight it off since he's schizophrenic and only half of his brain was hypnotized, which is genius. While Spidey tries to help Deadpool snap out of it by telling trigger words, including Ryan Reynolds (Hey, I get it!), Hypno-Hustler collects his things before escaping, which includes a mood ring, a pet rock and socks with toes. While trying to catch up on current events before escaping, he asks Tinkerer in Henry "Fonzie" Winkler ever made it to the White House. Damn... that dude is gonna be ecstatic when he learns about Obama. Before H.H. can leave (Why is he STILL THERE?!) Deadpool comes in with Spidey inpaled on his sword, H.H. takes off his goggled to get a closer look when he's attacked by Spidey and Deadpool, who switched costumes to fool him. Now THAT was genius. They make quick work of him and Spidey webs Deadpool to the floor to keep him there for the authorities as well. Spidey uses H.H.'s goggles to subdue Deadpool, who has the weirdest fantasy ever including a Deadpool version of Spider-Pig named Deadpork and Deadpool dressed like the cross-dresser from Rocky Horror Picture Show, as Spidey heads home to get out of Deadpool's costume and this issue comes to a close.


Thoughts: Now that was a pleasant surprise. I didn't expect much from this issue after the last one being so all over the place but I'll be damned if I didn't laugh my ass off. H.H. was awesome here, I'd love to see more of him, maybe as a member of Deadpool's Rogue gallery, along with Doctor Bong of course. And the twist of having them switch costumes honestly caught me by surprise, which made this all the more enjoyable. I never thought I'd say this, but I want more Hypno-Hustler!

Spider-Man: High-lever security? He's got a roommate, for crying out loud.