Hey everyone, JT here with my last review of the week, Minimum Carnage: Alpha. So what happens when Venom and Scarlet Spider team up to take on the crazed Cletus Kasady? Let's find out, shall we? 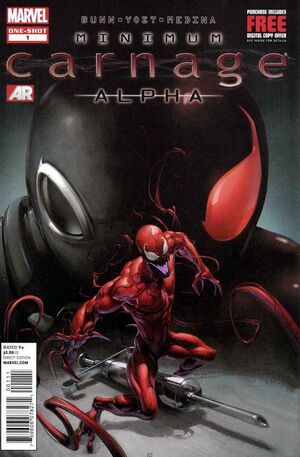 Summary: Things start off quickly, as this issue has a cinematic feel to it. We see Cletus Kasady sitting in his cell, when he looks up and says "Yes". We jump forward three hours and see Flash "Agent Venom" Thompson and a few armed soldiers, moving through the prison, looking for the recently escaped Kasady, as well as any survivors of the slaughtering spree he went on after escaping. They discover that the glass to Kasady's cell was broken from the inside, something he shouldn't have been able to do. Venom eventually finds the prison employees, holed up in a room trying to save themselves from Kasady. Venom tells them to call the police, the F.B.I. and the National Guard, because Carnage is on the loose. We eventually see Cletus Kasady, driving a car out of town when he's caught at a police checkpoint. They tell Cletus to surrender, but he says his friends won't like that. The officer insists that Cletus steps out of the car when suddenly his throat is slit, and the rest of the officers are attacked and killed as Cletus happily drives off. Back at the prison, Venom watches the security footage of when Cletus was freed and has the prison workers zoom in, as we see a small parasite or something on Kasady. Venom also asks why they didn't reform Cletus' symbiote, like they were able to do with his, and learns that Cletus' symbiote is bonded with him on a molecular level, and has nested in his DNA, which leaves Venom shocked. He then puts in the call to Hawkeye to alert the Avengers about Carnage, then calls his very own April O'Neil. Katy Kiernan, and asks if she knows anything about really small killers. She sends him an article from her paper about something that happened in Texas with shrinking and Venom heads off towards the Lone Star State. Two days later, we see the Scarlet Spider entering a burning building (because that's what heroes do, as Kaine says) when he stumbles upon the pieces of the body of a murdered woman. He says he's killed before, but whoever murdered that woman savored it. Kaine notices one survivor, a man that seems deathly afraid of him, but Kaine grabs him anyway and they escape the burning building. We later find out that the man that murdered the lady and scared the other guy was looking for his wife, and killed her mother for fun. Kaine heads out to find the man's wife before the murderer can, and it just so happens the woman is being questioned by Katy Kiernan. Kiernan asks the woman, Dr. Ketola, about a machine that allows people to go to a sub-atomic universe. The woman denies it but Kiernan knows there's a story there, but the two are interrupted by Carnage, who wants to use the "Prometheus Pit" as it's called. He attacks the Dr. Ketola and yells that her husband says hi, when Scarley Spider shows up and takes down Carnage. Carnage, thinking this is Spider-Man in a new suit (can you blame him?) underestimates the ruthlessness of Kaine, who immediately tries to snap Carnage's neck. Carnage says he likes this new mean streak in Spidey, and attacks with his tendrils, but Kaine uses his claws (I forgot he had those!) to cut them off, which tells Carnage he's not Spider-Man. Suddenly, Kaine is taken down by a bunch of smaller super-powered people that incapacitate him long enough for Carnage to make Dr. Ketola start the Prometheus Pit, and for him to throw Katy Kiernan in it as his guinea pig. Carnage gets ready to enter when one of his tiny cohorts reminds him of their deal, he has to kill some people for them, and they give him a whole new universe to kill people in afterwards. Kaine recovers and tries to stop Carnage, but Carnage enters the Prometheus Pit and disappears. Just when things can't get worse for the Scarlet Spider, he's told to get down and surrender by Agent Venom.


Thoughts: Now THIS is what I'm talking about! That's how you start a crossover. We got a quick introduction into each characters mind, for anyone who is only reading one series, we got to see them act on their own first before we saw them team up, and Carnage was built up like the threat he should be. Plus, we got a few unanswered questions like Carnage's tie with the tiny people and who exactly they want killed, which should keep people interested. After Bunn's lackluster start to Venom, I'm really enjoying what he and Yost have started here, hopefully they can keep the momentum going. Overall, this was a nice start and a very good way to get Flash and Kaine to cross paths.

Venom: I'm the guy. They're looking to me to lead them through this. I can't tell them how badly this guy freaks me out.