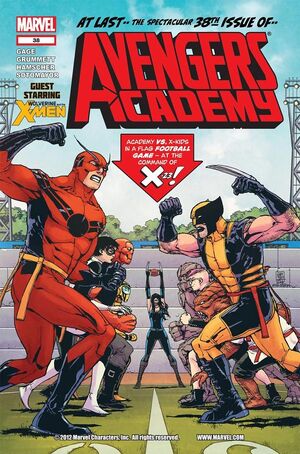 Summary: This issue has a lot to touch on, so I'll go with the broad strokes instead of a page by page rundown. The Flag football game is more of a framing device to get everyone in one place, as it falls to the back for this issue, but when touched on, it's awesome. The rules allowed the students and faculty that participated to use their powers, as long as they aren't using them in hostility, and if they do, they get ejected from the game. This leads to many ejections, some at the very start of the game (I'm looking at you Iceman and Hawkeye!) and more as the issue goes on. From there, we see Gambit talking a bit with X-23, about how killing a person as an assassin is different from what she did to Briggs, and how there may be some psychological problems to it, but Laura brushes him off. We also see Gambit giving advice on women to Reptil, who is still pining after Finesse, although she seemingly shows no interest in him. We also see Mettle and Rockslide share a moment where Rockside basically tells Mettle how lucky he is to have a girlfriend that loves him and he's anatomically correct, unlike Rockslide, and to appreciate how great he has it, to which Mettle agrees. Along with that, we get a great moment about Striker learning to accept who he is thanks to Anole, regardless of his new facial scars. Wolverine uses this time to tackle the hell out of Hank Pym, in a flag football game, as revenge for Pym kicking him out of the Quinjet during AVX. This of course leads to Tigra sticking up for her man and having a scrap with Wolverine off panel, before they're both tased by Jocasta to break them up. There's also the fight between Quicksilver and the Shi'ar warrior, Warbird, after she mentions how Quicksilver's marriage is a joke on her planet, as is he. Quicksilver tells Warbird that he's the reason his marriage didn't work out, he knows that and he's not going to live a lie and act like he's not hurt from it, which surprisingly leads to Warbird locking lips with the mutant marathon man. Another awesome scene was seeing Finesse admit to X-23 that she's the one that killed Briggs, and that she used Laura's claws to do it. X-23 is justifiably upset that her "best friend" used her as a weapon, and replies that she's killed everyone that's done that to her. Finesse says she hopes X-23 will realize why she did what she did, that she made a choice, and now X-23 has choices to make as well. The issue comes to a close as we see Pym, Jocasta, Kitty Pryde and Iceman discussing how hard it is to be a teen hero, and that maybe it's time the kids got something of a reward for their hard work.


Thoughts: First things first, I loved the cover being an homage to Uncanny X-Men #100, that's pretty awesome. So, I loved everything about this issue, like I said earlier. the football game was more of a way to get everyone in one place, but the one on one conversations, like the advice Gambit gave Humberto, the tense scene with Laura and Finesse, the bro-like conversation between Mettle and Rockslide and the hilarious thing with Wolverine, Pym and Tigra alone made this a fun issue. This was the kind of light-hearted, yet very story driven issue we needed before the last issue, and it really captured the amazing job Christos Gage has done in this series with these characters. This issue was perfect as far as I'm concerned, I enjoyed it immensely and in my eyes, that makes it a perfect issue.

Gambit: 'Ey, brother. You mind some advice?
Reptil: Grow my hair long and talk like Pepe Le Pew. Got it.
Gambit: Not what I was gonna say, but it works pretty good for me.