Hey guys and gals, JT here and I'm kicking off my reviews by checking in with the newest Green Lantern, Simon Baz. After escaping the authorities while being suspected of being a terrorist, with the help of his new Green Lantern ring, let's see how Simon copes with being a mebmer of the Green Lantern Corps. 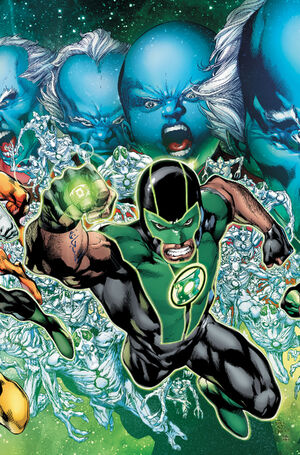 Summary: This issue starts with President Obama and Amanda Waller discussing Simon Baz, the suspected terrorist from Dearborn, Michigan's recent escape. The President tells Waller to notify the Justice League of Baz's escape, he doesn't know if he is a terrorist but he knows that a Green Lantern ring is capable of a lot more than a bomb in a van.From there we see Simon Baz, still unconscious after his escape, and the ring scanning his mind for memories, as we see Simon and his brother-in-law, Nazir, street racing when Simon wakes up. As Simon gets up, the ring gives him a costume from the neck down, and the ring shows a weird hybrid message from Sinestro and Hal Jordan. It's basically a message to their successor about not trusting the Guardians of Oa, and to stop the Guardians. As the message ends, Baz see's police officers driving near his position so he flies away with his ring, heading back to Dearborn. There, we see his sister, Sira, talking to their Dad, about how hard their lives have been since people suspect Simon is a terrorist but she knows he's not. She arrives at work and is basically given a leave of absence because no one there feels safe, because they think she may be a terrorist as well. As Sira cries in the alley, Simon approaches her. She's happy to see him but she's also obviously upset, as she questions him for stealing cars, and how he didn't notice one had a bomb in it. Simon says it was stupid (ya think?) but he was stealing cars no one would notice, so he could give money to Sira and her son. Sira says Simon is never around to talk to her, but he thinks she doesn't want him around, since him street racing with Nazir helped him end up in the ICU. Simon says he thinks the ring came to him to help him figure out who's bomb that really was, and he wants Sira to help him find out who, by using her sources at the Secretary of State to find out who the car he stole belonged to. She agrees to help Simon and tells him they'll meet at their old meeting place tonight, and to hide his face. Next we see the newest "children" of the Guardians, continuing to assimilate humans for the Third Army and they're now seeking Simon Baz, due to the Green Lantern energy reading on the planet. Simon arrives to his secret meeting place to meet Sira and see's a security camera, so he constructs a mask to go along with his Green Lantern costume. Before Simon can relax, he's suddenly knocked off the roof and is told that he's in trouble. It nturns out he is, as he's confronted by Superman, Batman, Wonder Woman, Aquaman, Cyborg and The Flash a.k.a. The Justice League.


Thoughts: This issue was pretty good in my opinion. Simon is pretty likable to me, and his sister makes him even more likable because she seems like a sweet and nice character, so you relate to Simon as the regrettable big brother. I liked that we got to see the messages left by Sinestro and Hal, and how different the two are, even when saying similar things. The League popping up here surprised me, and I'm looking forward to seeing how they treat him after Hal's disappearance, Simon just showing up, and whole "terrorist" thing. The next issue should be interesting to say the least.

Superman: You're in a lot of trouble, Mr. Baz. Like Justice League trouble.