Hey X-Todd Squad-Maniacs or something...Man, that was a fast week! Seven reviews later from your truly while our good buddy X enjoyed his break, here we are. Make sure you comment how I deserve a raise in pay or something for picking up X's slack. Anyway, our final review for the week is none other than Scarlet Spider, the man who does whatever a Spider-Man won't. So let's get to it, shall we? 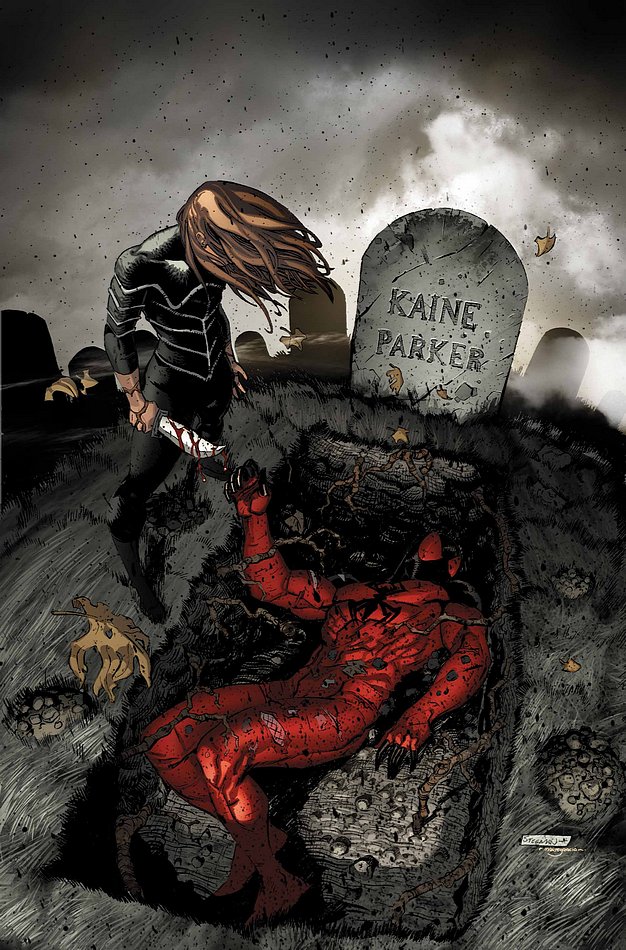 Summary: This issue starts off with a bunch of news reports with most people praising Houston's new hero, the Scarlet Spider, who may have a bit of a temper but is still appreciated by many H-Town residents. From there we see Kaine getting a tattoo on his arm for some reason, and after that we see he's a bit peeved being called the Scarlet Spider, a name that was attributed to his "brother", Ben Reilly. He's then approached by the young woman he saved a few issues ago, Aracely, and they go to dinner, although unknown to them, their being watched by a shadowy figure. At dinner, Kaine has a few questions, like how Aracely always knows where to find Kaine, and how she can suddenly speak English. She claims it's because he speaks English, and he gives off a certain vibe, methinks we're dealing with a psychic type. Kaine eventually asks Aracely where Annabelle is, to which she replies church. Kaine heads down to the church, which has been rented out for a concert apparently... cause churches do that I guess. While there, Kaine is confronted by Ana Kraivinoff, daughter of Kraven the Hunter, and one of the people that helped kill Kaine a few years ago. She immediately attacks Kaine with a blade, which was tipped with poison and slows down Kaine as he pursues her. She then torches the church, killing some people who aren't able to escape, as Kaine is too slow to save them due to the poison in his bloodstream. Ana continues to attack Kaine, but he's much stronger than her, which gives him a slight edge, until they fall through the ceiling of the roof to the ground below. Ana, much more serious than before, states that Kaine will die again, as she's killed her own brother and will kill Kaine too. The ceiling then caves in over Ana, and surprisingly Kaine leaps in and saves her. She claims Kaine is becoming weak like Spider-Man and she escapes, but not before telling Kaine that Kraven is coming for him and will eat his heart. Kaine escapes the burned wreckage, wondering why he saved someone that was trying to kill him. Maybe he is a bit more like Peter than he though.

As the issue comes to a close we see four epilogues; the first with Kaine asking a priest for help, wondering why he's alive but not his brother who was a much better man. Basically this is a wake up call for Kaine to try to live to the standard that Reilly set. The second epilogue shows us The Salamander, a villain from a few issues ago, awaken by a mysterious man who tells him he is needed at home with "The Mexica", and that the wolves will deal with the girl. The third epilogue shows us Julia Carpenter, Madame Web, with her daughter when Madame Web suddenly falls to the ground screaming that "She's coming back, she's coming back for Kaine." And the final epilogue shows us Ana alongside her father Kraven, telling Kraven all the information she has on Kaine, about Aracely, Annabelle, his Cop and Doctor friends, and where he lives, as well that he saved her life, and playing Hero has made him soft. The issue ends as Kraven proclaims that he and Ana have hunting to do.


Thoughts: Man, this issue flew by. This, like the last issue, seemed to be more of a set up issue than anything, but it did set up a lot. We've got Kraven and Ana coming for Kaine, Kaine's questioning of if he can live up the Ben Reilly is an interesting turn, plus giving Kaine a love interest in Annabelle. Add in the fact we've got the mystery of Aracely and the Mexica and we should have some great stories down the line. Oh, and Chris Yost, don't be an ass and name a wine after yourself in a comic. Or do, do whatever you want as long as you keep Scarlet Spider better than your Red Robin run.

Aracely: I saw a commercial on tee-vee for bar-b-que. I want to eat bar-b-que with you.
Kaine: You are so weird.
Aracely: Bar-b-que!
Posted by Jason Todd at 10:27 PM