Hey guys, JT here with the last review of this comic week. After a super-mega-boffo-huge post that X made, obviously compensating for something... but I, your humble blogger, will present to you a modest review of the final issue of Spider-Men. How will things end for the partnership of Peter Parker and Miles Morales? Let's find out! 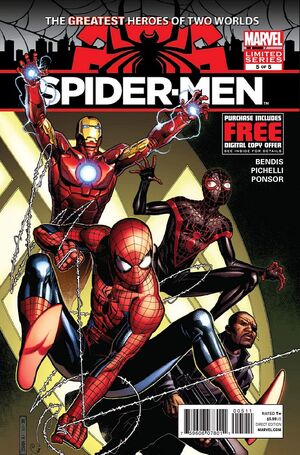 Summary: This issue gets things underway with Mysterio getting ready to move on and leave Spider-Man suck in the Ultimate Universe, but he can't resist popping in to see Spidey one last time, which of course backfires. He opens the portal and is webbed through it by Spidey, and arrives in the Ultimate Universe, face to face with Spidey, Ultimate Spidey, Hawkeye, Thor, Iron Man, Nick Fury, and a bunch of S.H.I.E.L.D. agents. Spidey prepares to go through the portal and back to his own Universe when Mysterio puts his final plan into action, by using some kinda scarecrow-like gas to make each of the heroes see their fears. Spidey talks the guys through it since he's used to Mysterio's special effects, and Miles snaps out of it in time to see Mysterio trying to escape. Miles tackles Mysterio through the portal and he and Mysterio end up back in the 616 Universe. Miles is in awe and Mysterio tries to take advantage and attack him, but Miles counters his attack and kicks Mysterio back through the portal, as he follows, back to the Ultimate Universe. The Spider-Men dish out some vengeance to Mysterio and he's then arrested by the S.H.I.E.L.D. agents. Spider-Man asks if they're gonna keep Mysterio in the Ultimate Universe and Fury says its for the best, since he knows Peter Parker's secret identity, and that can do much more damage in Pete's universe than Miles'. Before he finally heads back home, Peter gives Miles his blessing, as well as a bunch of advice, including to never get cloned, keep Doctor Octopus from marrying his Aunt May, leave crime scenes ASAP or they make you clean up, and the most important advice, which Spidey doesn't get to say because the portal teleports him back to his Universe. Fury tells Miles that he earned Peter's blessing, now he has to keep earning it. The issue comes to a close as Peter, back at home, decides to look up Miles Morales in his world. He finds his answer, that we of course don't see, as Peter says "Oh my God."

Thoughts: This was a kinda odd comic. I like to imagine they were waiting for days before Mysterio just happened to open that portal and get webbed through it. This mini series was okay, I expected more but it could've definitely been worse. I'm going to be very disappointed if we don't find out anything about the 616 Miles Morales, and it better be big the way Peter reacted. Also, I'm kinda peeved we didn't get to see what Pete's "most important" advice was, that seemed like a cop out, especially when he gave him lesser advice like loaning Wolverine money... All in all, this wasn't a bad issue, but it was far from great, I'd say it was average.

Iron Man: And I would give the opposite advice on almost every subject by the way, if anyone cares.