Hey guys and gals, JT here with a special guest. I'll give ya a hint, he's kind of a big mouth, he's a bit crazy, and he's harder to get rid of than a cockroach infestation. Nope, it's not X, it's your favorite Merc with a Mouth, Deadpool! (Hey nerds, DP here to add a little flavor to this review for once, I figure since this blog has two geeks writing for it, you need someone with TWICE the awesomeness to make it interesting, so, here...I...am.) Um... yeah, so since Deadpool invaded Avenging Spidey this month, he decided to invade your favorite blog. (I literally JUST said that bro...) So... let's get this over with, quick! 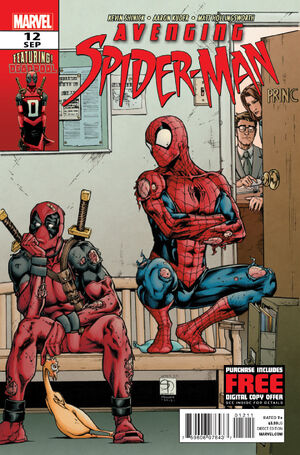 Summary: This issue starts off with Peter Parker being embarrassed in his dreams, basic being at High school naked nightmare. (Maybe for you! Sounds like heaven to me.) When suddenly, Deadpool (Wooooo!!!) shows up and starts blasting some faces. Deadpool explains that this is a dream that Spidey's in, and someone's trying to access his mind to make Spidey commit a crime. He explains that Spidey's mind is going to make him see the infiltrator as a bully or a teacher, but lucky for him he has help from one of the world's greatest mercs. Deadpool explains that their four levels deep so basically they have to take out the baddie of each level to get Spidey to wake up, so Deadpool blows up the school... cause why not. (I'll tell you why, cause explosions are FUN!) On Level three, Deadpool makes a few funny jokes (Aww... just a few?!) before he targets the R.P.G. kids as the baddies, so he and Spidey attack, but Spidey tells Deadpool no guns. Deadpool begrudgingly agrees and the two take down the Dungeons and Dragons dweebs (Aliteration is fun too. Damn, dashingly devious Deadpool craves chewy chimichangas.) which takes our masked heroes to level two. Doesn't take long for a fight as Deadpool and Spidey take on some shop class goons and quickly dispose of them as well, except Deadpool manages to get his face split open by a circular saw, which was pretty awesome. (Man... you are one sick bastard.)  Ahem, while on the final level, Peter's dream has him staring in the The Breakfast Club, with Peter as the nerd, Flash as The Jock, Mary Jane as Molly Ringwald, Deadpool as John Bender (You know what I got for Christmas this year? It was a banner friggin' year at the old Wilson family. I got a carton of cigarettes. The old man grabbed me and said "Hey. Smoke up Pooly.") and... some mystery chick as our basket-case, which shows she's the infiltrator. Spidey knocks out our mystery chick, and Deadpool's watch goes off, so he kicks Spidey through some glass, which wakes up our favorite Arachnid based hero. Deadpool informs Spidey that he's awake but Pool's the one who was actually infiltrating his mind to make him commit a crime. (WHAT A TWIST?!) Deadpool says he did it so he could get some help from his employer since they discovered a way to kill Deadpool. (This is before Deadpool #50, available at a comic store near you, when I was trying to figure out how to kill myself.) The issue comes to a close as Spidey asks who Deadpool's employer is and Deadpool replies... The Hypno-Hustler?! (Dun dun dunnnn)


Thoughts: This was an interesting issue. The issue itself was subpar in my opinion, but Deadpool's humor was great, and he had a ton of lines that made me laugh out loud. And I'm NOT just saying that because he has a gun to my head. (Keep typing, monkey.) But besides Deadpool's humor there wasn't much, plus I figured this would be a one and done, so I was kinda surprised to see it wasn't and the reveal of Hypo-Hustler... I can't say I'm excited for that. (So... since we're done where do I get my check?) There's... no check. X and I work for free. (What is this... DC Comics? Later nerds.)

Deadpool: Dude! Your imagination has the proportionate lameness of a spider. If you don't step it up they're gonna start calling this Avenging Deadpool.