Hey guys, today's a JT day, and my first review of the new comic book week is none other than Justice League #0. Instead of focusing on Superman, Batman, Wonder Woman, and the rest of the League, this issue focuses on non-other than SHAZAM himself, the man formerly known as Captain Marvel. So let's get to his origin! 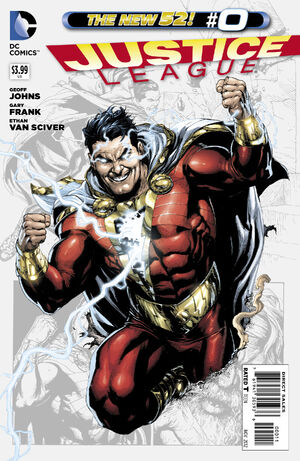 Summary: We start things where the back-ups in the prior issues of Justice League left off, teenage bad seed (aka asshole) Billy Batson is adopted by a pair of loving parents that also have adopted a bunch of other kids. While out one night with his adoptive brother, Freddy Freeman, Billy wanders off into a magical underground cave where he meets a great wizard, only the Wizard tells Billy that the task he has is not for someone like Billy. Billy is adamant about the old Wizard keeping his distance, and the man asks (I guess the Gods?) if the boy is the mystical one he seeks, and if he's pure good. We see a bunch of flashes of Billy being a dick to everyone, and the Wizard says he knew Billy wasn't pure good. Billy tells the Wizard no one is pure good, good people get swallowed up and become evil or get walked on, there's no one pure. The Wizard starts to think Billy may be right since he's brought many people and no one has been pure yet, but he searches Billy's soul to see if he's got any embers of good, which we also see clips of. Seemingly backed into a corner by the fact that Black Adam is now free upon the world, and Billy seems to be the best he's going to get, The Wizard bestows Billy with the power of SHAZAM, because if someone MIGHT be good, why not give them an excellent amount of power? Worked great for Black Adam, right? The Wizard tells Billy to say SHAZAM with good intentions and belief, as I guess he'll only change if he has good intentions, which may be for the best. Billy, now in the body of SHAZAM, tests his powers a bit as The Wizard explains, but he tells Billy not to waste his powers, The Wizard tells him of Black Adam and how he hopes to free the Seven Deadly Sins, and Billy is the only one who can stop him. As the Wizard takes his final breath he tells Billy that he is now SHAZAM. Billy wastes no time telling Freddy Freeman what happened, while still in the body of SHAZAM. Billy then decides to destroy a man's car because he threatened Billy and Freddy earlier when they were being delinquents. They then decide their going to have Billy buy beer... these powers are so being wasted. Before that can happen, Billy touches a Christmas light which explodes, showing that maybe he can't touch electric things without overpowering them while he's SHAZAM. He then witnesses a mugging, so he swats the mugger away and manages to knock him through a car window since he doesn't know his own strength. The woman that he saved asks what she can do to repay him, and he says he's short on cash... so she gives him twenty bucks and he and Freddy head off to buy beer. The issue comes to a close with Freddy and Billy planning to use his powers to become rich. There's also a quick back up as we see Pandora, the woman from all of the New 52 backgrounds trying to open a skull shaped box, when The Wizard appears. He says he's using the last of his powers to tell her that she shouldn't have been punished along with her other two cohorts who would become The Question and The Phantom Stranger, The Trinity of Sin, and that she was just a curious young woman that did nothing wrong. He then tells her that the box can only be opened by the Strongest of Heart of the Darkest of Heart and they can claim it's power but of course he dies before he can say who. The back-up story ends as we go to Hub City and see The Police find a little girl who was missing, The Mayor's daughter, as well as the man who kidnapped her tied to a lamp post. The police wonder who did it as we see nothing but a blue question mark taped to him (wasn't The Riddler!) and we see The Question, saying that everything is all connected as the issue ends.


Thoughts: Well... this was awesome! I love this annoying, jackass version of Billy Batson! And the way he used his powers for stupid vendettas, got paid for saving a lady, and now wants to use them to make money, he's like DC's version of Alpha or something. This issue was pretty awesome, we learned about Black Adam's past a bit, Billy finally got his powers, he's still using them like a kid instead of being super goody two shoes like he was pre-reboot. This... I guess the term would be hardened Billy Batson has been one of the best things to come out of the DCnU so far and I hope it continues. Plus I can't wait to see what happens when he actually joins the Justice League... Another thing that needs to be mentioned was the amazing artwork by Gary Frank and Ethan Van Sciver, they did both did fantastic jobs on the artwork for this issue. Also, the back up with Pandora that hyped the upcoming Trinity War was interesting. I'm curious as to who can open the box, Strong of heart makes me with Wonder Woman, maybe Bats, but he could also past for Darkest of Heart, either way, I'm interested. Plus... The Question is back, and It looks to be our boy Vic Sage!

Billy: Listen, Chester (HA!), that stuff might work like candy on six year olds, but you come any closer and I'll knock out the last of your teeth.