Hey X...Squad...JT...Maniacs or... whatever. Today's a JT day, which means it's infinitely better than yesterday or tomorrow :D Today we're gonna check out Avengers Academy, as the "Final Exam" storyline comes closer to the end, along with this series, let's see if your Academy Teens have what it takes to stop Briggs. 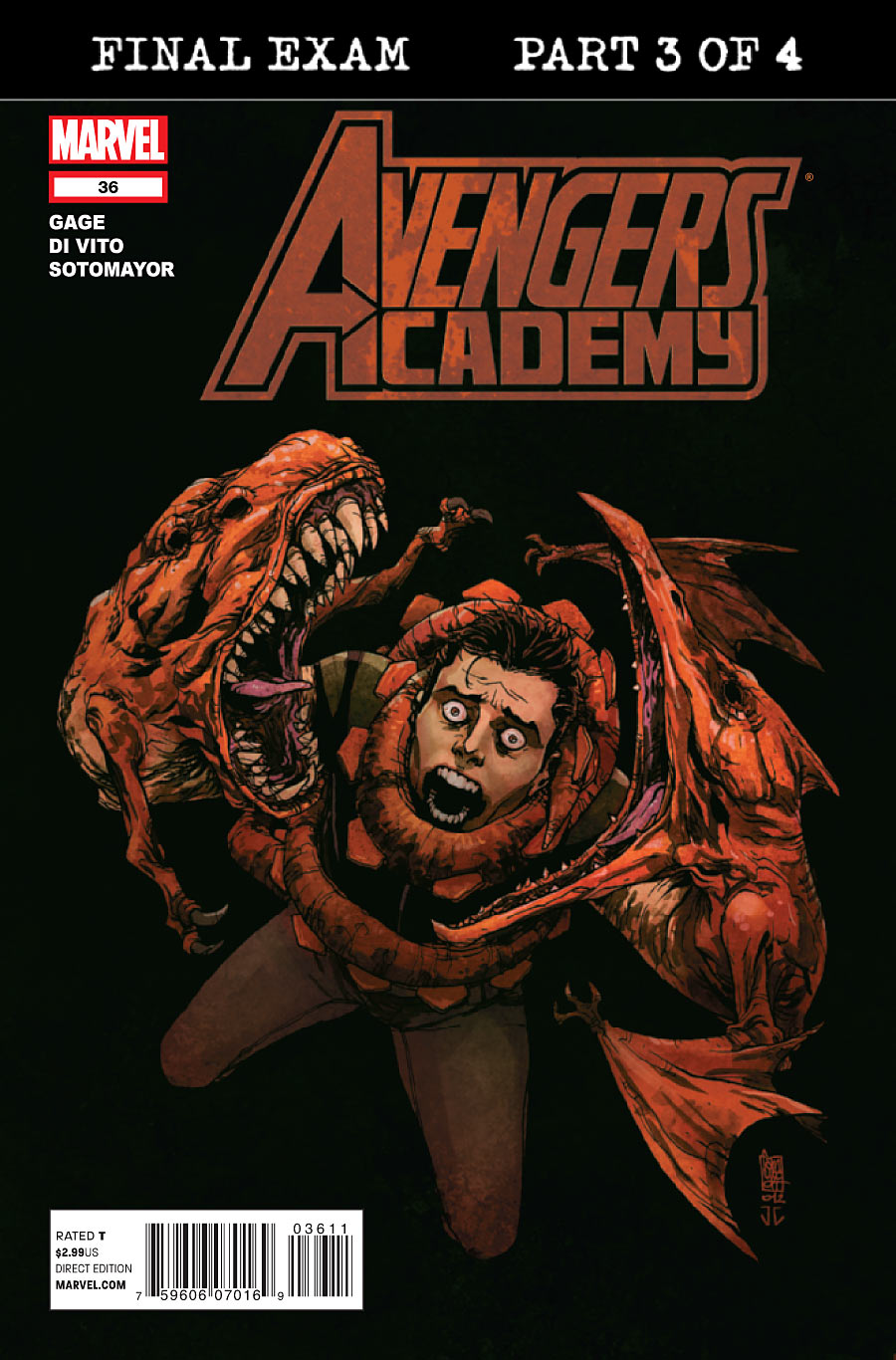 Summary: Things start off quickly, with a pissed off Hazmat blasting Briggs and Enchantress as they attacked Striker, they run off, in fear of getting cancer from Hazmat, as Striker stands up, showing his face is now scarred all over due to Briggs and Enchantress' attack. Veil and Mettle come to find the two but say they can't get Hazmat's suit because it's behind a protective door, so Striker follows Veil to short out the electronic panel. Hazmat tells Mettle to leave before he's hurt by her powers, but he says the reason he hasn't changed yet is because Osborn had his skin cut away to show his powers, so Hazmat tells him he can leave and be normal. Mettle steps closer to Hazmat, as her powers slowly melt away his skin and he embraces her, saying she does get her last kiss, as the two share a passionate kiss while Mettle returns to his previous form. Veil and Striker return with Hazmat's suit and head off to stop Briggs. On the other side of the building, Finesse, X-23, Reptil, White Tiger, and Lightspeed take on Coat of Arms, with White Tiger and Reptil basically giving up on getting their amulets, until they get a speech from Lightspeed telling them they need to take control of their lives. Inspired by her words, Reptil and White Tiger attack Coat of Arms and each grab their amulets, causing each to be teleported inside of them. White Tiger talks to her amulet's avatar and says that she needs the power, because she needs to save her friends, and because it's her legacy. The Amulet's Avatar agrees, is she gives the amulet one day each moon cycle to run free, and she agrees.

Meanwhile, Humberto speaks with the Hag of the Pits (Bwahahahaha!!! Hag! Priceless...) the person that created his amulet. The old Hag tells him he can take his powers back, but he must pay a price. One day he will have to fight for the creatures whose powers he possess, and he may die in doing so. She asks him if he can bear that burden, and he says yes, re-powering him as well. With their powers and the help of X-23 and Finesse, the teens make quick work of Coat of Arms, and are then reunited with Striker, Mettle, Hazmat and Veil. The team has to make a quick decision, as they have to go after Briggs before he releases the Clean Slate on the world's superheroes, but if they don't get X-23 the cure fast, she'll die of adamantium poisoning. They discuss splitting up but they know they won't be able to get the antidote without doing it together, due to Briggs having it under lockdown. They decide to go after the antidote to save X-23, and giving them to the rest of the team that needed them as well. With everyone re-powered, they head to the roof after Briggs, but arrive just as he's released the Clean Slate to the world, as this issue comes to a close.


Thoughts: First things first, that scene with Mettle and Hazmat, like most of their scenes in this arc, was amazing. Just the visual of seeing Ken's flesh burn away as he embraced and kissed his girlfriend was extremely strong and it goes to show how talented of an artist Andrea Di Vito is, as well as the always Grade A+ writing of Christos Gage. Also, this is one of the first comics in a while that I can remember having no Credits page, which was good because it never broke up the flow of the pages. I enjoyed mostly everything here, except for the fact the gang didn't split up. I kinda get their point but if Hazmat could kick Briggs and Enchantress' ass earlier, then why not just send her and Finesse or her and White Tiger to at least slow Briggs down? And Lightspeed's speech was a little cheesy and awkward for a fight in the middle of a room, but those things aside, I still enjoyed this comic. I'm definitely looking forward to seeing how the Academy crew, and I'd wager, Jocasta, stop Briggs' master plan.