Hola comic readers, JT here with the first review of the new comic week, and who better to start things off than the biggest name in Marvel Comics? One hell of a hero that I hope is in the next Avengers movie... that's right, I'm talking about Alpha! And I guess his sidekick Spider-Man as well. In the last issue, Spidey decided he was going to stop Alpha, will he succeed? Let's find out right now. 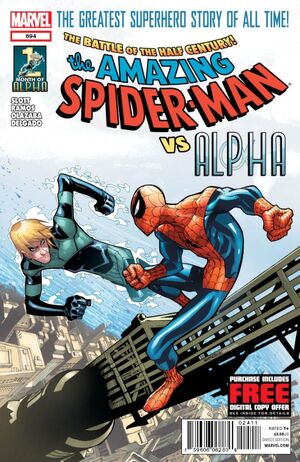 Summary: We start this issue with Alpha skipping his weekly check in with Peter Parker a Horizon labs to go to a appearance in Tokyo. We find out that Peter has been in his lab for days trying to come up with a way to cure Alpha because he's too dangerous, and that Pete hasn't gone out as Spidey or helped the FF or Avengers in a few days. He's even missed seeing off Aunt May, as we see her and Jay Jameson boarding his private jet. Seems like they could've waited since it's his private jet... but whatever. Peter decides to try to rush to see Aunt May off and dresses as Spidey so he can web-sling through town, when he runs into the Avengers, who need his help taking on the giant villain Terminus. Captain America tells Spidey to call in Alpha, as they need a big gun, but Spidey says he doesn't think it's a good idea. Cap persists so Spidey calls Alpha who jumps at the chance and flies from Tokyo to Manhattan in seconds, and attacks Terminus. Spidey is shocked because Alpha's only limitation was that he could only use one power at time, yet now he's used Super-Speed and Flight, showing he now has no limitations. Terminus deflects Alpha's blast and it causes every aircraft within a ten mile radius to shut down. Spidey has Captain Marvel sling him towards Jay's Jet as the rest of the Avengers head off to save the falling planes. Spidey enters the jet and tries to help Jay and May land the plane but the landing gear is stuck, so Spidey manually pushes it out with his feet as they land. After the rough landing, J. Jonah Jameson arrives on the scene and surprisingly thanks Spider-Man for saving his father and his mother-in-law. Back with Terminus, the Avengers defeated Terminus and Alpha fled the scene. The Avengers try to figure out what to do with Terminus and his energy lance but Spidey asks for the chance to study it, and maybe he can cure Alpha. Next we see Spidey calling Alpha to Horizon labs and he has him step into the chamber that Peter uses to check Alpha's power levels. Spidey turns it on and notes that he figured out a way to de-power Alpha, because yesterday was a test and Alpha failed miserably. Alpha begins to cry as Spidey explains his days as Alpha are in the past, and he's to go back to living with his parents and going to school. He'll be teased and laughed at but eventually everyone will forget, but he'll know and Spidey will know that a little bit of power is still in him and always growing, and maybe someday they'll try it again, but with a mask, and not as Alpha, because that's over. Afterwards, Peter visits Aunt May in the hospital and learns that because her leg was injured in the landing, she'll have to use a cane to walk for the rest of her life. Peter convinces Aunt May to move back to New York, to which Jay agrees, and just like that, Jay and May are back. The issue comes to a close as we see Kingston arriving back in New York as well, and he goes to a shipping container and picks up a bag, pulling out his Hobgoblin mask and stating that "he's home."


Thoughts: Dan Slott is great, first things first, Alpha has become a hell of a character after only a Month. And the little things that make this issue even cooler, like the "1 Month of Alpha" label in the corner, like it's a milestone that should be celebrated is awesome. This issue was great because Spidey had to stop Alpha, he was getting way to powerful, and the way he was stopped means he can always come back in the future, and he's a good enough character that he should be brought back somewhere down the line. I don't care much for May returning, she seems to get in the way a lot, but other than that I really enjoyed this issue. Seeing Jameson thank Spidey was surprising but awesome, and seeing how heart-broken Alpha was to lose his powers was great in reminding you that although he comes off as an ass, he was still just a kid. Now with the Hobgoblin storyline coming up as we get closer to issue 700, to say I'm excited is an understatement.

Alpha's Answering Machine: If this is a girl, leave your measurements.