Hey turkeys, Today's review is the penultimate issue of what seems to be an everlasting comic book, Avengers vs. X-Men. I honestly can't wait for this series to end, I feel like it's been 10 issues so far and nothing noteworthy has happened. Well something has now, but is it enough? 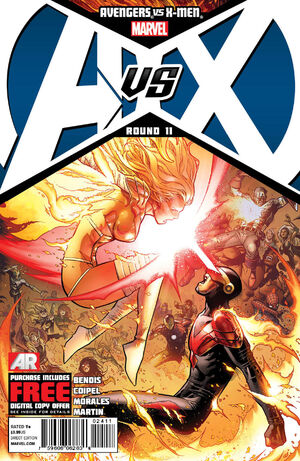 Summary: This issue starts off with Captain America and his cohorts recruiting The Big Green Smashing Machine, The Incredible Hulk. Hulk agrees to smash for them, and after every other mutant jumps sides since Scott and Emma are being bat-shit crazy. Emma and Scott meet and Emma says she knows Scott is thinking of defeating her and taking her powers to have the full Phoenix Force, but Scott denies it, saying she must be thinking of it. Emma says she thinks they should destroy the world and start all over again, as she's pretty much fully consumed by the Phoenix. Scott is preoccupied by Charles Xavier, who basically tells him that he's shutting Scott down, Scott denies it but doesn't even realize he's been subdued until he tells Charles to get out of his head, and Scott sees he's in the middle of a giant fight between the Avengers and the other mutants vs. Scott and Emma. After a giant fight, Scott decides he needs more power and attacks Emma, then drains her of the last bit of Phoenix power. Charles pleads with Scott to stop but Scott decides to blast Charles, killing the X-Men founder. Scott says Charles made him do it, as he cries a few tears. Wolverine has Hulk "Fastball Special" him at Cyclops but cyclops burns him up before he can even hit him. The issue comes to a close as Cyclops becomes the Dark Phoenix.


Thoughts: Well... they needed to kill someone I guess? That... weird decision aside, this storyline has been horrible. In the beginning the X-Men were the underdogs, and each team were making valid points, there were no bad guys really. Just different opinions, then they decided to make the "Phoenix Five" into villains for no apparent reason. Anyway, this issue seemed so... odd. It seemed rushed... yet eleven issues into a twelve issue mini-series, you'd think they wouldn't NEED to rush things. Yet, the whole thing with the mutants siding with the Avengers, Charles and Magneto confronting Scott and Emma, the fact Colossus, Namor and Magick are basically just gone as far as this storyline concerns, and the whole thing this issue was built up to be, Scott vs. Emma for the last bit of Phoenix power, barely lasted TWO PAGES! I just don't get it... and now they've made Scott the Dark Phoenix with one issue to basically have him defeated, de-powered and humbled. Sigh... Between this and the last DC event I read (Brightest Day) I'm about to swear off the company events.

Hulk: Yes. Hulk will smash for you.