Hey Todd Squad, today we're gonna check out this week's issue of Amazing Spider-Man. With The Lizard now stuck as Curt Connors and trying desperately to get his scaly backside back, let's see how Spidey deals with the upcoming confrontation. 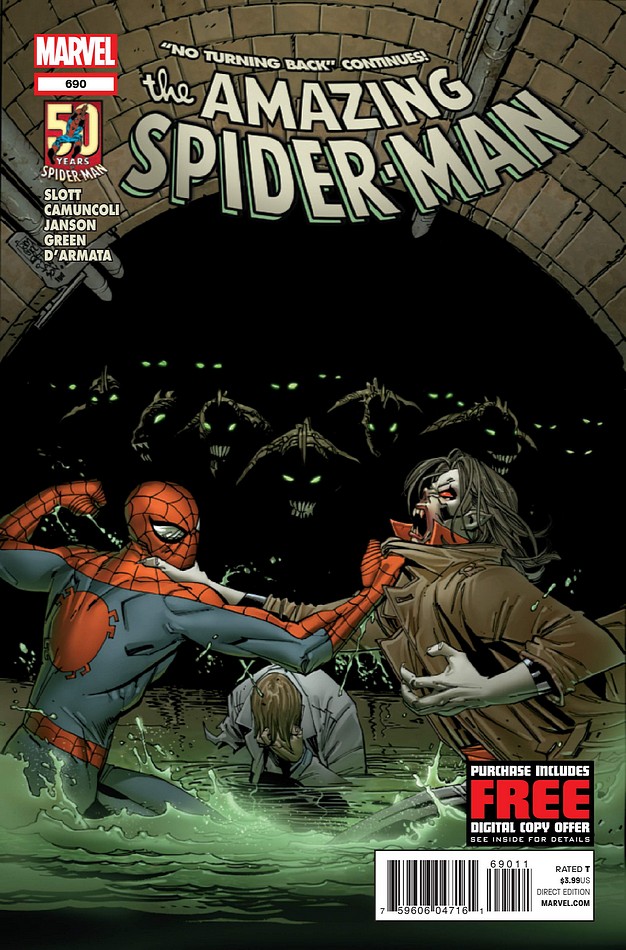 Summary: We start things off with a Lizard-minded Curt Connors cutting off his right arm with some kind of lightsaber like device. He has to remain undercover while he tries to revert back to Lizard form, so he can't walk around with an extra limb. He throws the disarmed...arm to a Lizard version of Max Modell to chomp on and then goes to try more experiments, each time testing them on other members of Horizon Labs in their personal labs, including Grady and Bella. Meanwhile, Spider-Man is fighting Morbius in the middle of the city when Madame Web pops up telling Spidey how urgent it is he heads to Horizon Labs, Spidey argues about stopping Morbius but eventually see's she's right, so he tries to make quick work of him and leaves him webbed for the police. Back at Horizon, after a few more failed experiments and cut-off arms, Connors runs into Uatu, who looks like Billy to him. Uatu says Connors looks stressed and needs to relax, and invites him to play video games. Surprisingly throughout this issue, the Lizard-minded Connors has enjoyed music, Dorito's and video games more than he ever would have as a Lizard. Being with Uatu helps Connors figure out what he needs for his "cure" to change him back to Lizard form. When Connors leave's Uatu's room, leaving him unharmed, he runs into Officer Cooper, who notices that Connors is missing his left arm... not his right. Connors runs as Carlie pursues him. At just that moment, a mechanism is set off by a Horizon Scientist Tiberius Stone, who is apparently working with Kingpin. The doors unlocking unleashes the Lizard versions of Max, Grady, Bella, and other people that Connors injected. Spidey swings into Horizon just in time to save the few remaining civilians. Back with Connors, he's still running from Officer Cooper when she's attacked by Modell, which causes Connors a distraction so he can slip into a closet. He gets ready to inject himself with the final cure when The Lizard starts to wonder if he even wants to go back to the way he was, as this issue ends.


Thoughts: This issue was kind of weird for me. It was about Lizard-Connors, which is cool, but him loving life and living as a Lizard-brained Connors so he can play videogames and listen to pop music is just... odd. I'm sure he'll use the injection it but it seemed like an odd cliffhanger. Plus, the stuff with Morbius seemed to end too quickly, so hopefully he's in the next issue.


Carlie: Aren't you supposed to be missing your right arm?