Well this is interesting... The last issue of this series was under the Fear Itself banner and as far as I remember, the T-Bolts were still in the midst of the Fear Itself event. I wonder what changes that...

Summary: This issue takes place in two different settings(REALLY different settings, but I'll get to that later). As always, I'll tackle this issue one setting at a time. First up we head to Luke Cage, Songbird and Mack-V discussing how and why the T-Bolts fell apart so dramatically during the Fear Itself tie-in issues. Luke pretty much blames himself for not sticking with the T-Bolts and instead battling against Sin on the side of the Avengers. Looking back Luke also blames himself for being so hard on the Juggernaut, which is what probably led to Juggy falling into the Serpent's grasp. Mach-V and Songbird realize that they aren't blameless either though, as they basically kept ignoring Fixer, leaving him an easy target for a master manipulator like Baron Zemo. Meanwhile, Fixer and the renegade T-Bolts have transported the T-Bolt's tower to somewhere in Austria. Fixer and Centurius, the resident geniuses on the renegade T-Bolts, begin scanning the nearby area to see if Mach-V, the Avengers or anybody else was looking for them, but discover the area to be devoid of any satellite chatter. As the two begin to dig further, they realize that they can't get a GPS signal, can't get online and can only find radio broadcasts from many years ago. While the renegade T-Bolts are trying to figure out what had happened to the world to cause this type of damage, they are suddenly attacked by an army of Nazis! And I'm not talking about Sin's mechanized Nazis, but the real deal. It's at this point Fixer realizes that something went VERY wrong and besides teleporting through space to get away from the T-Bolts, the team also seems to have teleported through time. The renegade T-Bolts charge out and attack the Nazis(against the wishes of Centurius, who feared they may inadvertently alter the past), and are soon joined by Captain America and Namor from the Invaders(!!). Cap is surprised to see another super-powered team battling the Nazis, and Moonstone, quick thinker that she is, tells Cap that they were America's newest power squadron, the American Thunderbolts.

Thoughts: Yeah, I really enjoyed this one. First off, I have to commend Jeff Parker on two things here... The first is that he writes the best Luke Cage I've read in years. This isn't Bendis's SUPER-Luke, this is more the Heroes for Hire Luke Cage, a guy with some flaws who makes mistakes. I was always a fan of Luke's during whatever H4H series he used to appear in because he wasn't the strongest, smartest or most powerful, but he was always one of the bravest. Bendis's SUPER-Luke can do no wrong, can stand up against any threat and is a natural leader, even over characters such as Tony Stark and Clint Barton. So yeah, I wish Luke was exclusive to this comic and was away from Bendis. The other thing I really liked that Parker did here was move the renegade T-Bolts away from the present for the time being, thus not having to reveal anything about the way Fear Itself ends. Setting the main story in the past is just genius. Now I will admit that it all wasn't perfect... We never find out what the hell happened to the flaming Man-Thing from last issue or how Luke came to the side of Mach-V and Songbird after being absent for most of the T-Bolts Fear Itself tie-ins, but that's not that big a deal all things considered. The bottom line here was that this was an exceptional comic that I enjoyed reading. 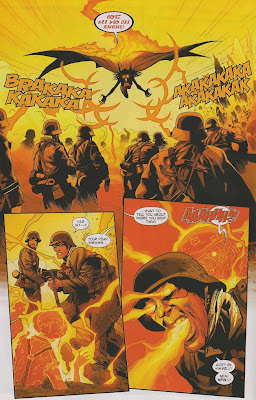