Hey OSGuys and OSGals, it's your favorite blogger, JT, with my second review of the week. The last issue of Avenging left off with Spidey about to face to Hulk, while pursuing Chameleon, as he wore a dead Doctor's face. 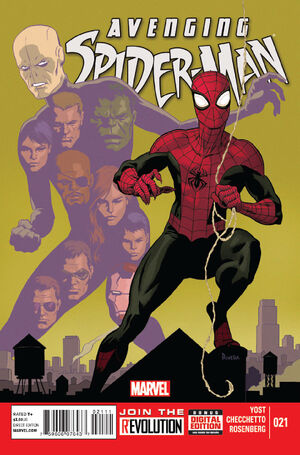 Summary: In this issue, Spider-Man frantically tried to find Chameleon while the Helicarrier was attacked by Russians and guys that wore masks and could burn you with their hands. Superior Spider-Man was delayed by The Hulk, but Hulk was soon distracted and then blown off of the Helicarrier by a missile from the Russians that attacked from outside. With Hulk out of the way, Spider-Man, Black Widow, Hawkeye and Nick Fury make short work of the attackers, which allows Spidey to pursue the Chameleon, still posing as a Doctor. Spidey tries to talk to Chameleon, saying he was never this blood thirsty and that he's his responsibility, but Chamaleon gets the drop on a distracted Spidey and stabs him with a syringe. Spidey goes after him and runs into one of the mask-wearing Russians, and manages to knock him out as well as Chameleon. Spidey uses the communicator that the Russian was wearing and sends both unconscious men, the Russian and Chameleon, to the base where he's holding his other former teammates. He then tells Fury that the Russians got Chameleon and teleported him to a nearby enemy ship, so they blow it out of the sky, leaving everyone to think that the Chameleon is dead.

Thoughts: This arc really didn't do it for me. I just couldn't get into the secrets and the Russians attacking S.H.I.E.L.D. and Chameleon only wearing one face for the entire time. It's just odd to me that for the issues with The X-Men team up or the one with Thor vs. Electro, we basically got one issue, self contained stories, but for this story it was two issues, which didn't really seem necessary. But That's my opinion. All in all, this issue wasn't bad but it was far from great or memorable for me.