Well, with the next few days looking free and clear for me schoolwork-wise, I've got a lot of comic reviews to try to bust out before I wind up getting swamped with homework/papers/exams again... With that said, I'm going to post not one, not two, not even three reviews tonight, I'm going to post a whopping 5(!)reviews, and all 5 are a part of Marvel's latest money-grab... I mean MAJOR CROSSOVER EVENT, Siege!!! No, this isn't going to be a, “Let's bash Marvel post”(or at least I don't think it will be...), so far I've been pleasantly to SHOCKINGLY impressed with Siege so far. While Blackest Night continues to drag along in the DCU, Siege has been a well-paced, fast-moving x-over. And the biggest surprise of all? It's written by BENDIS! I'm sure the other shoe will eventually drop, and this x-over will leave me feeling sad and angry, but thus far, BENDIS has been alarmingly on his game, which is very much unlike him... OK, with all of the warm and fuzzies out of the way, let's see if these x-over comics continue to leave me happy, or will reality finally set in?

OK, we have a few different storylines here, so I'm going to tackle them one at a time to keep this review somewhat coherent... Or at least that's the plan. Besides that, it should be noted all of the action here takes place during the events of Siege #2. Osborn and his crew stand triumphant over Thor, which has Taskmaster grinning from ear to ear. Before he can do a happy dance or anything, Osborn disciplines him for attacking Thor against orders and sends him back to Asgard. However, Osborn allows Diamondback to remain, which leaves her wondering if he had managed to figure out she was a double-agent, also working with the Avengers Resistance. Before she discovers why Osborn asked her to stick around though, Maria Hill strikes and rescues Thor, while Constrictor arrives on the scene to spirit Diamondback out of there. After being sent away, Taskmaster battles a few Asgardians, only managing to get away from them after the Asgardians stop to watch what Sentry did to Ares. Away from all of this, at Camp HAMMER, the Avengers Resistance is attacking the undermanned facility, and are doing a pretty good job of making their way into one of Osborn's main bases. Before they manage to gain entrance, the Hood shows up and begins to blast the heroes with magic, rendering them unconscious. Before the Hood can kill anybody, he is attacked by Tigra, who was still looking for revenge against the Hood due to his brutal attack on her several months back. We end this issue with the Hood telling Night Thrasher of the Avengers Resistance(who he had been secretly conspiring with)that if he killed Tigra, the Hood would use his magics to return the original Night Thrasher to life.

You know, I don't know what's going to become of the Avengers titles after Siege, but whatever happens, I REALLY hope Christos gets one of, if not THE main Avengers book, because he's been incredibly solid on this series since he took it over. He did a wonderful job of blending his story into the main Siege storyline, while continuing to move the storylines from this series forward. We're definitely starting these reviews out on the right foot, with this one... 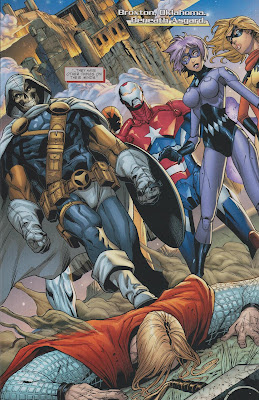 I'm so glad the Taskmaster is finally getting some respect in the Marvel U.

This issue actually takes place before Siege gets underway, and yet it has the Siege banner adorning the cover... We kick things off with Osborn's second in command, Victoria Hand, telling Osborn that he should go to see a psychologist to make sure that his Goblin side doesn't re-emerge due to the stress he's been under. Osborn says no, Hand says yes, and after several pages of this, Osborn finally agrees to do as he's told. From there, Hand walks into the Avengers conference room where Moonstone and Bullseye were in the throes of passion and blasts Moonstone with a gun that can even harm Moonstone as a lesson to stop disrespecting Osborn. From there, the Sentry, who is now fully possessed by the Void launches an attack on NYC with tendrils of darkness striking down from the heavens, causing widespread damage. The Dark Avengers hit the streets and try to save as many people as they can, and Osborn heads into the sky to try to talk the Void down. The Void complains about his Sentry side, and the Sentry's wife. The Void then insults Osborn, telling him that Osborn has no way to stop his rampage, but Osborn informs the Sentry that although he can't stop the Void, there are several other heroes who can. That gives the Void pause, and Osborn tells the Void that if he ceases his tantrum, he'd do something that would make the Void quite happy. With that the Void halts his attack on NYC, and this issue ends with Osborn heading into Bullseye's room later that night to inform him that when he gives the word, he wants Bullseye to murder the Sentry's wife.

Although I was annoyed that this issue had NOTHING to do with the Siege storyline, even though the cover clearly states that this was a Siege x-over issue, I have to say, this comic was quite good, which kind of scares me... I mean, whatever happened to BENDIS, the man who I could always count on providing a horrible story? I used to be able to say with confidence, even before I read a BENDIS comic that it would be terrible... However, lately BENDIS has been busting out some of his best work in YEARS! If he keeps this up, I may have to stop calling him by all caps... Now, there were a few dead spots in this comic, such as the LOOONG and boring conversation between Hand and Osborn(sorry, I have NO interest in Hand at all), but for the most part, the story was sound, BENDIS refrained from his usual annoying dialogue(for the most part anyway)and the cliffhanger ending was good. So yeah, as weird as it feels, I have to say that I did like this comic. 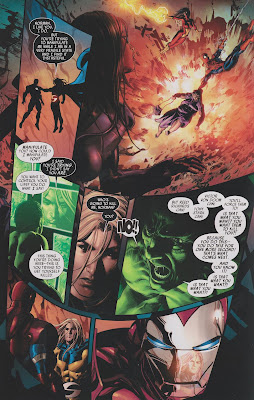 A shiny new penny to the first person who tells me why this comic was a Siege x-over issue!

This issue begins with Spider-Woman trying to kill Spider-Man thanks to the telepathic influence of Mandrill, who is basically a talking monkey-thing... *Sigh* This fight goes on for most of this issue, and eventually ends when Spider-Man somehow gets through to Spider-Woman, freeing her of her mind-control. The two heroes then take care of Mandrill and Griffin. Back at the New Avengers not-so-secret headquarters, Bucky and Steve Rogers manage to take care of some HAMMER agents and the Living Laser with some help from BENDIS'S FAVORITE character, Luke Cage, because in BENDIS-Land, one Luke Cage is WAY better then two Captain Americas... OK, since thinking about this comic is actually starting to piss me off, I'm just going to fast forward to the ending. All of the Avengers meet up at one of Nick Fury's bases and decide to go to Asgard to help Thor... Hey wait, didn't I already see this EXACT scene play out in Siege #2?

Well, this is what I get for complimenting BENDIS... Serves me right I guess. This comic was complete and total rubbish. BENDIS writes a HORRIBLE Spider-Man, probably because he writes mainstream Spidey in the exact same manner he writes teenage Ultimate Spidey. The dialogue was crappy, the story was pointless, and the payoff was something I've already read about in the Siege mini... In other words, reading this comic was a complete and utter waste of time. 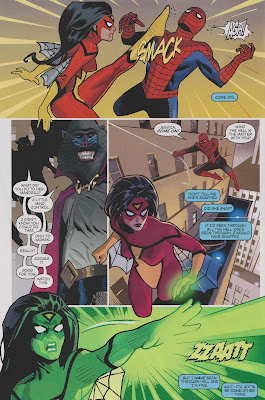 We open this issue up with the Asgardians chilling(I guess Asgardians chill...)at a big old banquet dinner. While they're all eating and being merry, Fandral and Hogun alert the current king of Asgard, Balder, as to what transpired between the U-Foes and Volstagg at Soldier Field in Chi-Town. The two Asgardians explain to Balder that Volstagg, feeling terrible for the tragedy he was unwittingly a part of had surrendered himself over to the Oklahoma police force. While the Asgardians are discussing how to make matters right, Knut, who can apparently see the future(although he is more often wrong then right)rushes into the banquet hall and warns the Asgardians that Asgard will fall the following morning. Nobody buys Knut's ramblings, and Loki promises to take Knut back to him room, telling the other Asgardians that Knut probably simply had too much to drink. Knut begs Loki to believe him, and to Knut's surprise, Loki tells the old man that he does, after which time Loki kills Knut so he wouldn't be capable of warning the Asgardians to what was to come. The following morning, Loki manages to lock the watchman of Asgard, Heimdall, in some sort of magical nether-dimension, so he would be incapable of warning the Asgardians nor assisting when Osborn's forces attacked. With that, Osborn and company launch their attack, and the Asgardians, caught by surprise begin to mount a defense. Upon hearing about what was transpiring, Volstagg asks the cops who were watching over him to let him speak to the country to offer his forgiveness. The cops allow Volstagg to use a webcam to apologize, while casting doubt on Osborn's story that Volstagg acted alone. Volstagg then leaves the prison to help his fellow Asgardians, but he is met and attacked by Ragnarok(!!!).

This was actually the first Thor comic I've read in probably two years(I stopped reading after they turned Loki into a woman), and I have to say, I really enjoyed it! The story basically gave us some idea of what the Asgardians were going through while Osborn was rallying his forces against them. Plus the inclusion of Ragnarok at the end was VERY welcome. I've been waiting to see Ragnarok pop up again after he left the Initiative series, and it makes perfect sense for him to show up in this book. I know I'm definitely looking forward to a Thor/Ragnarok showdown. All in all, this comic was so good, I'm a little bit tempted to grab a few trades to see just what I've been missing. 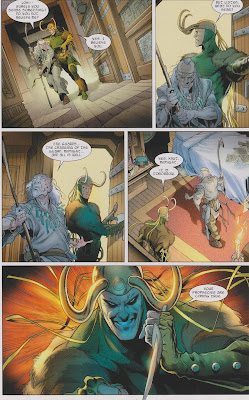 Man, I'd forgotten just how awesome Loki could be!

The T-Bolts get orders from Osborn to sneak into Asgard while Osborn and his forces occupy the Asgardians in order to steal a supremely powerful Asgardian artifact from Asgard's armory called the Spear of Odin. Osborn figures if he were to wield an Asgardian weapon against the Asgardians, he could possibly defeat all of Asgard. With that, the T-Bolts sneak into Asgard, make their way to the armory, fool around a little bit, and eventually discover the Spear. Before they can escape with the Spear, they are confronted by an Asgardian guard, who Mr. X actually manages to kill(!), before they run into the Mighty Avengers, ending this issue.

This was another comic I used to collect before I started reading DC books and had to cut back on my Marvel expenditures, and much like Thor, I was pleasantly surprised by this comic. Having not read it for quite some time, I wasn't sure what to expect, but I was into the story from the get go, which means the writer did a good job. Once again, if I have some extra money laying around, I may try to grab a few T-Bolt trades to see what I've been missing. 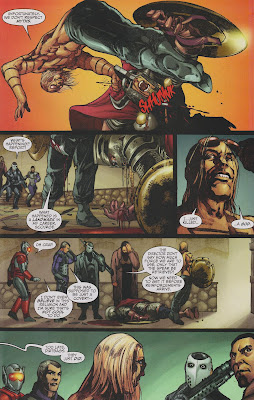 Wow, I wonder who decided to start using Mr. X... What an utterly obscure character.
Posted by x-man75 at 11:34 PM